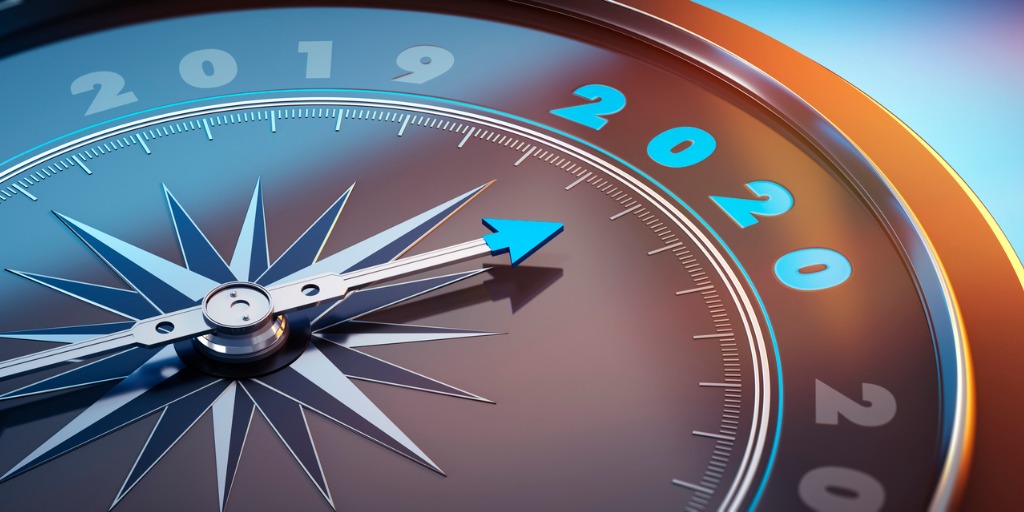 It’s been an incredible decade in the US stock market that was capped off by a 2019 which saw returns on the S&P 500 exceed 30%. While US large companies led the way, but just about every asset class produced strong returns for investors.

Source: Morningstar, as of 12/31/19. See market segment explanation in footnotes

Based on this run, we’ve encountered a lot of consternation over the possibility of a recession or a correction in the markets. After all, we learn from an early age that what goes up, must come down and it sure feels like we’ve gone way up over the past ten years.

There will always be people who will point to what has happened recently in markets as reason to believe that’s what will continue (momentum, markets showing strength/weakness) and people who believe exactly the opposite (mean reversion, being “due” for a reversal). I don’t know who is going to be right. But, I’m pretty confident that whoever ends up right, will probably get the timing wrong.

It was hard to escape recession anxiety over the summertime. It seemed like you couldn’t turn on a TV or read a newspaper without seeing a headline like “Is another financial recession imminent?”. If the blitz of pessimistic news had caused you to capitulate, it would have been a disaster for your portfolio. Since mid-August, US Large Companies, US Small Companies, Developed International, and Emerging Markets are all up double-digits2.

Investment outcomes depend far less on reacting to a single, or even several years, of what-if’s. As we’ve stressed many times before, your portfolios are built with the expectation that declines will happen. Your financial plans account for loss. What your financial plans don’t account for are periods on the sidelines hoping to dodge declines, but instead missing out on gains.

How the SECURE Act Affects You

The final weeks of 2019 included the last-minute passing of legislation that carries significant changes for qualified retirement accounts and IRAs called the “Setting Every Community Up for Retirement Enhancement (SECURE) Act”. I’m going to skip over most of finer points of the Act, as they generally apply to employers designing their retirement offerings or to fringe-cases. However, there are two major changes that will affect many of our clients.

I’ll start with the good news. The required minimum distribution (RMD) age has been increased to 72. The new RMD age is effective for anyone who turns 70 ½ after December 31, 2019. For retirees that do not need income from their IRAs, this allows for further deferral of distributions. While not a huge change, it will be welcomed relief for those that would otherwise be forced to take distributions (and pay taxes on those distributions) when they don’t want to.

Unfortunately, the SECURE Act brings some bad news as well. Effective January 1, 2020, IRAs that are inherited by non-spouse beneficiaries must be fully distributed within a ten-year period (with a few niche exceptions). This is a huge development for those who have large (or projected to be large) IRA balances and intend to leave their IRA to one or two children.

Previously, when a non-spouse inherited an IRA, they could elect to take distributions from the account over their life expectancy. In most cases, this allowed for the beneficiary to enjoy modest additional income each year for the rest of their lives. Because the distributions were generally moderate in size, the taxes incurred on the additional income were often realized at the same marginal rate as the rest of the beneficiary’s income.

Under the new laws, it is likely that beneficiaries will have to take much larger withdrawals from these inherited IRAs. The effect may result in the beneficiary jumping up one or more tax brackets due to the magnitude of the required distributions. Ultimately, this could erode the actual value of the inheritance considerably.

To a retiree, who intends to pass their IRA onto their children, this issue may seem easy to dismiss by saying “Well, that’s going to be their problem.” Indeed, several early conversations with clients on the implications of the new legislation have started with this very sentence. However, this line of thinking misses the point.

When you eventually pass away, there are two final destinations for your assets: Your beneficiaries and taxes. I think it would be appropriate to believe that pretty much everyone would prefer more of their assets go to the former, as opposed to the latter. By suggesting that the new rules are the beneficiaries’ problem to deal with, you are electing to leave more of your assets to the government vs. your children. Most of the financial strategies that can be taken to mitigate some of the additional tax need to be taken by you while you’re still alive. There’s little the beneficiary can do to mitigate the taxes after they inherit the money.

To further complicate matters, it is unclear how proactive account custodians will be in notifying new inherited account owners of their obligations for taking distributions. My worry is that beneficiaries will be unaware of their distribution requirements and neglect taking any distribution from their inherited IRAs in the first several years of the 10-year clock. This would have the effect of further compressing the distribution window, necessitating even higher and more tax-burdened withdrawals. We’ll have to see how things play out, but it may be wise for IRA owners to consider broaching the topic of eventual inheritances with their children or even including them in their financial planning process.

As we have discussions and meetings with clients over the next year, expect to spend some time on this topic if your IRA balance is high and your intentions are to bequeath to just one or two heirs.

The 2010’s were excellent to Ferguson-Johnson Wealth Management. John Ferguson invited Derek to join him as an owner of the company he founded over 40 years ago. We moved into a beautiful new office in Rockville. Jon Powell has developed into a force to be reckoned with on our advisor team. We have overhauled and implemented major changes into how we manage investments and produce financial plans, increasing the quality and value of what we’re able to deliver to clients. On the personal side, there’s been weddings, and children, and grandchildren. It has been truly a bountiful decade for us all.

We expect the 2020’s to be no different. We will continue to strive to improve as advisors and as people. We will commit to learning and constantly challenging our assumptions and biases about investments and personal finance. We will embrace new technologies designed to make our clients’ financial lives easier and provide more clarity and understanding.

Finally, we’ll work with more clients that need our help. If there are those in your life that you think could benefit from something we offer, please let us know. We want to work with families that can learn from us and grow with us. The hubbub that popped up in Congress a few years ago regarding the regulation of advisors was eye-opening to us. As fee-only, fiduciary financial advisors, we are of a small breed. Most of the advisors out there do not work in their client’s best interests. They sell products and use investments that make them money. We don’t. It is more important than ever to work with an advisor that is not incentivized to give you compromised advice.

Do You Want to Start Working with a Financial Advisor in 2020?

Did you know that you need to count to 1,000 before finding the letter “a” in a number, spelled-out?

Why Aren't Stocks Down More?