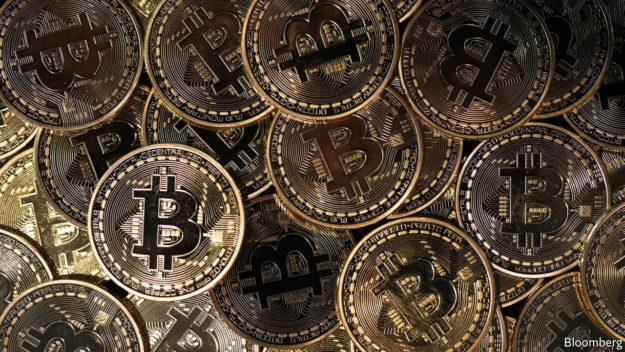 What to Make of Bitcoin From an Investment Perspective

Bitcoin is has been in the news a lot recently. As of August 24th, the price of ‘physical’ Bitcoin had increased by 336%, year-to-date. Of course, as anyone who has looked into purchasing direct Bitcoin already knows, the process of “investing” in Bitcoin is rather complicated and poses a litany of unique risks.

However, the first way for consumers to easily purchase and “invest” in Bitcoin was given SEC approval to trade as an ETF on regulated exchanges a few weeks ago. The Bitcoin Investment Trust (GBTC) offers investors a way to have an interest in the price movements of Bitcoin in their IRAs or brokerage accounts. Now, before you run off and commit a portion of your retirement account to Bitcoin, let’s talk about a few things.

The Bitcoin Trust is currently trading at a premium close to double the net asset value of the fund. If you were to buy a share of this fund today at $750, you would actually be purchasing $383 worth of Bitcoin. To illustrate what’s going on here, let’s imagine an ETF as a small cardboard box and the underlying investments of the ETF as US dollars inside that box. What’s happening is that there is $50 in the box, and investors are paying $100 to buy the box.

Why anyone would pay twice as much for the same thing seems preposterous on its surface, but the reason actually makes some small amount of sense. Currently, this is the only way to purchase Bitcoin in an easy way. It is also the only way to get Bitcoin into an IRA. So, the premium is due to GBTC being the only game in town.

Long-term, this is untenable. It’s hard to imagine the price of an asset trading at a premium (or discount) indefinitely. In the case of Bitcoin, unless the market collapses or is eclipsed by rival currencies, it stands to reason that more ways to invest cheaply and easily in Bitcoin will become available. This will create less demand for GBTC. The result being that the premium for GBTC shares will come down.

GBTC also comes with a unique form of risk (beyond the ludicrous volatility of Bitcoin itself). With ‘regular’ ETFs or mutual funds an investor can purchase, there is little concern over the security of the assets in the fund. The stocks and bonds aren’t going to be lost or stolen. However, this is a non-trivial concern for the Bitcoin ETF. Investors in the Bitcoin Trust need to have a certain amount of faith that Xapo, the company who stores and protects the physical Bitcoins, has the technology and competence to protect the Bitcoins against cybercriminals, insiders, fraudulent activity, and other threats. Importantly, Xapo does not insure the Bitcoins it holds. In the event of loss, investors will be out of luck.

Let’s take a step back for a moment and look at what Bitcoin really is and what the application of it might be. Let me caveat everything you’re about to read with a warning: I am by no means an expert on Bitcoin and Blockchain. I’ve read a lot and followed this for a long time. I believe I have a decent understanding of the application and economic consequences of Bitcoin. However, I am not equipped to go into the technological specifics about its creation or mechanics.

Bitcoin is a fascinating technology. Well, to be more specific, Blockchain, is a fascinating technology. Blockchain is a decentralized ledger, of sorts. The best way I can describe this is to imagine how a bank functions and your relationship with it. When you write a check for $100 and the recipient cashes that check, money moves from your account to theirs. The bank is not literally taking a $100 bill, putting it on a plane, and giving it to the recipient. What they are doing, is simply noting on a ledger that your account has a $100 deduction and their account has a $100 addition.

Traditionally, there is a central authority that presides over this ledger. In the case of my example above, this is your bank. In order for this system to function we need to accept several ‘rules’ laid out by the bank. 1) We need to trust that the bank is keeping an honest, timely, and accurate record of accounts and transactions. 2) We need to subscribe to the bank’s terms of service (hours of operation, days to clear transactions, etc…). 3) The bank needs to be compensated in some way for their services. 4) The bank needs to qualify their account holders in some way (an identity is necessary for an account).

What blockchain technology aims to do is create a decentralized authority to eliminate the need for a third-party recordkeeper and the ‘rules’ that come with them. With Bitcoin, this is satisfied by a massive network of ‘miners’ acting as an ever-present safeguard against fraudulent activity on the ledger. This effectively makes the historical record of transactions un-alterable. For their service miners get compensated with new Bitcoins. From here the technology gets rather complicated and is outside the scope of this article.

It’s unclear yet how Blockchain technology may be utilized by business or government. The theoretical applications are very appealing, but as with any new technology, adoption will take some time.

So, Blockchain seems all well and good, but what you’re actually buying here is still Bitcoin. Separate from the future applications of Blockchain, Bitcoin specifically has some barriers to future viability. The problem I see with the long-term viability with Bitcoin is three-fold:

First, there is a hard limit on the number of Bitcoins that will ever exist. With traditional currency, a central bank can always just produce more money. Obviously, this causes inflation to varying degrees. However, in a closed system where no additional money can be produced, we run into the opposite problem: deflation. Bitcoins can be lost. Depending on the source you reference, it is estimated that up to 1/3 of all Bitcoins are already irrevocably lost. As more Bitcoins are lost while simultaneously there are more people demanding Bitcoin, a cycle of extreme deflation could be created. Deflationary conditions are one of the factors that caused the Great Depression.

Secondly, Bitcoin is a saturated and limited money supply that rewards early-adopters. Imagine for a moment if tomorrow Bitcoin became the only currency of the world and all wealth was concentrated in the amount of Bitcoins you held. Wealthy people would become penniless (no pun intended), and people who own Bitcoin would effectively rule the world. It would be an unimaginable forced transfer of wealth that would also make the wealth gap of today look like a happy socialist society.

Obviously, a currency conversion would not happen overnight. But, even strung out over years or decades, generations of wealth building for billions of people would be eradicated. To me, this is the biggest deal-breaker to the absolute adoption of Bitcoin as a currency. You can count on rich people not being okay with not being rich.

Third, it turns out having a central authority with a ruleset is actually pretty important. If you’ve read this far in my post, you’ve likely read stories before of people using Bitcoins to buy and sell drugs, weapons, and other manner of illegal goods and services. Since Bitcoin does not require any form of identity proof to make or receive payments, making transactions can be done with semi-anonymity. So far, this has paved the way for illegal behavior.

The concept of the “free hand of the market” is bandied about in Bitcoin enthusiast communities. What this means is that the market will regulate itself. If something is bad for people, the collective will reject it and it will die on its own (without authoritative intervention). The stigma of illegal activity is already a drag on Bitcoin. It stands to reason that this drag will only magnify as the size of the “free hand” grows.

Understanding Bitcoin as an “Investment”

With traditional stocks, the motivations behind why most investors are trading are somewhat straightforward, typically for one or more of the following reasons:

“Investors” in Bitcoin seem to have different motivations. There are zero fundamentals to Bitcoin. There is no cash-flow on which to base a valuation. There are charts, but they offer laughably little guidance to even true believers of technical analysis. From what I can tell people buy Bitcoins because either; 1) They believe Bitcoin will replace traditional currency; 2) They are investing in the idea of Blockchain, and Bitcoin is simply a proxy; 3) They want to gamble. 4) They’re curious. This might be a good time to disclose that I own a de minimis amount of spot Bitcoin because of intellectual curiosity.

I don’t want to tell you one way or another what to do with Bitcoin. My purpose here is simply to make you aware of the risks and macroeconomics hurdles facing Bitcoin and how that may affect its value. I would be unsurprised if Bitcoin surged to multiple times its current value or if it became worthless in the next six months. I would also be unsurprised if both happened.

I’ve been using the term “investment” in quotations for this entire piece because I don’t consider Bitcoin to be an investment. Investments promise dividends or cash flows in the future. Bitcoin is a quasi-currency you can speculate on. Nothing more. “Invest” with caution.