The Federal Reserve & Me

Starting in December 2016, the U.S. Federal Reserve (the Fed) had been gradually increasing interest rates (specifically, the federal funds rate), until it reached a high two years later in December last year of 2.25–2.50%. As of last month, that changed: The Fed lowered interest rates by 0.25%. This move was the first rate decrease since the thick of the 2008 recession. While the move was expected, it nevertheless received wide media coverage accompanied by the usual outpour of opinions on whether it will be a blessing or curse to financial markets. As of today, the President is urging the Fed to further decrease rates to zero “or less”.

A zero-interest rate environment isn’t unheard of. In fact, we just emerged from a multi-year period where the Federal Funds Rate sat at 0%. 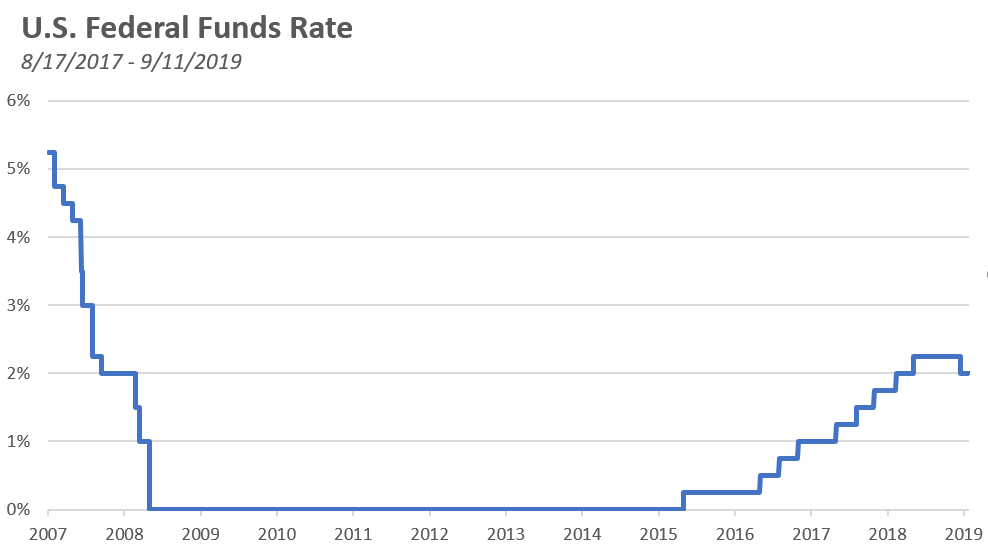 So, what does the rate change mean to your financial well-being or investment portfolio? While it is important to remain informed, it is generally only prudent to act on factors you can expect to manage within your personal situation. This is nearly always the case for economic, political, and sociological events over which we have no control.

In that context, let me take a moment to share some insights about interest rates and the Fed as a whole:

An Explanation of the Federal Reserve

The Federal Reserve is the central bank of the U.S. It was created by Congress as an independent government agency early last century “to provide the nation with a safer, more flexible, and more stable monetary and financial system.” The Fed is not under authority or supervision of the executive branch – though the President does ultimately appoint Fed chairpersons.

Jerome Powell acts as the current board of governors’ chair (head of the Fed, so to speak). He and his board are based in Washington, DC. They also oversee 12 regional reserve branches across the country and are tasked with three main roles:

Monetary policy is where most of the headlines tend to come from. The Fed continuously reviews when, by how much, and how frequently it should change interest rates.

In the weeks and days before the FOMC meets, financial news outlets and pundits often report on the expected actions of the committee as if they were already a done deal. Markets typically react ahead of the actual meetings as well by pricing in these expected moves. Sometimes, the outcome of the FOMC meetings ends up being a surprise and runs counter to what forecasters had expected. When this happens, markets often experience volatility as investors adjust to the sudden and unexpected news.

The FOMC’s has several tools at their disposal as they seek a balance among the competing demands of the economy. Adjustments to the federal funds rate has always been one of the more effective means to accomplishing its objectives. You don’t have to go too far down an internet rabbit hole to find pundits arguing over whether the Fed is wielding interest rate tweaks as a sledgehammer or scalpel on the economy. Depending on who’s talking, rising and falling interest rates can be anything from divine intervention, to a horrible plague, to a total non-event.

The Impact on Consumers

It is essential to understand that there is a delicate interplay between various nations’ monetary policies, domestic and global interest rates, and the stock market. Anyone who claims to know exactly what will happen in one domain when a lever is pulled in another is full of it… or they’re an actual wizard.

Here’s an example to consider: This March 2018 column, by Wall Street Journal columnist Jason Zweig, points out various brokerage houses and their anemic sweep account (cash) yields despite then-rising interest rates. He notes: “The Federal Reserve has driven short-term interest rates up a full percentage point since late 2016; one-month Treasury bills were yielding 1.6% this week. But you’d never know any of that from looking at the returns on the cash in your brokerage account.”

The same all may happen in reverse. When the Fed lowers interest rates, the rates you pay on your mortgage and credit cards may or may not decline as well. There is not a one-to-one link between the moves the Fed makes and how it affects interest-paying accounts and lines of credit you personally hold. That’s because the only interest rate the Fed has direct control over is the U.S. federal funds rate, which is the rate at which depository institutions (mostly banks), lend and borrow overnight funds with one another. It has no direct effect on your savings account or auto loans.

So, why is there a disconnect? Keep in mind, the Fed is just one player (albeit a significant player) in the global economy. Consumer behavior through demand for goods, savings/investment preference, and debt appetite can have a greater influence on real interest rates than the Fed. Their actions are aimed to influence banks to adjust policy so that it trickles down to eventually influence consumer behavior.

What Does It Mean For You?

If you already have a financial plan and a prudently constructed investment portfolio aligned with your objectives, we do not recommend abandoning it in reaction to developing news. If you don’t have a well-built plan and portfolio to guide the way, then that’s where your focus should be – not on Jerome Powell. Personalized financial planning is a good idea whether interest rates are surging or receding.

It is important to recognize that rising or falling interest rates can impact many aspects of your financial life. Saving, investing, spending, and debt all become more, or less, desirable in different interest rate environments. A conversation with a financial advisor can help put it all in perspective through the lens of your unique circumstances.

No matter what interest rates are now and in the future, we can help put these and many other worldwide events into the context they deserve, so that you can make informed judgments about what they mean to your own interests. The goal is to establish practical ways to manage your debt; wise ways to save and invest; and sensible ways to spend, before and in retirement.

This is what matters the most in your life and it’s what you can actually exercise control over – for better or for worse. Connect with our team today if you think we can help make things better for you.

A New Year (a new decade) is an opportunity to get things in order and make improvements. Every article published this week and last is a list of...

How to Protect What's Yours - While You're Alive

In our world, a great deal of time is spent having discussions over the proper ways to perform estate planning tasks. This can be as simple as...

What Are The Ways A Financial Advisor Gets Paid?

Fee transparency has been a hot-button issue in the financial advising community over the past few years. High profile stories of unsavory compensation...

Your Brain on Distressing Financial News

“How much pain has caused us the evils that have never happened?”